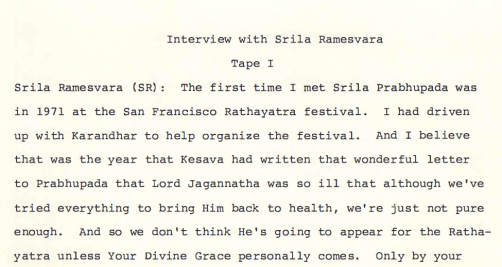 A very, very important document has just become public. It is a 300+ page transcript of a 1979 interview with Ramesvara Dasa (manager of the Bhaktivedanta Book Trust when Prabhupada was with us). Ramesvara Dasa was the person directly in charge of printing Srila Prabhupada’s books.

In this interview Ramesvara Dasa is giving a completely honest account of Srila Prabhupada’s instructions to him in regard to not changing his books and on many other points also.

This is perhaps the most important document that has come to light in ISKCON since 1977.

You can download and read the PDF file of the interview by clicking on:

Here are some of the important instructions on responsible publishing given by Prabhupada to Ramesvara Dasa:

“And also at that Mayapur meeting of 1976 we had had meetings with Prabhupada about the Bhagavatam. We prepared for that Mayapur festival a color board which showed all the volumes of the Bhagavatam drawn in for each Canto what the color would be. And Srila Prabhupada approved the color scheme for the Srimad-Bhagavatam for all the reprints. But he warned us emphatically that this must be the very very last change that is ever to be made in the Srimad-Bhagavatam.“

“Prabhupada at that time approved the new design for the Krsna Book trilogy and then he approved the standardization in terms of lettering and so on for the Bhagavatams and he approved the new color board. That is what the 12 Cantos are going to look like. Prabhupada was very happy to see that we had made a plan. But then he got very grave and said, “Now, this is the final plan, this is the final approved standard, there can never be any more changes.” He was emphatic, he was insistent, and he pounded it into our heads.“

“What about the incorrect grammar? “Prabhupada’s reply, “You cannot change one comma, not even a comma, not even a punctuation mark, that is the etiquette.” So that was just another one of those super heavy instructions that the etiquette in dealing with a great acarya’s books is that whatever he has done it’s eternal and it can never be changed. And I believe that all of this was part of Prabhupada’s training us . He wanted to train people who would be entrusted with his books.

“…you can get a first hand understanding of how intense Prabhupada was and how concerned he was that in the future no one ever be allowed to make changes in his books. This was more than just a preoccupation with Prabhupada. This was a, you could call this a transcendental phobia, that the entire movement would without any shadow of a doubt be completely wasted and all the work and effort of all the devotees that Prabhupada was directly as well as his own efforts would all be ultimately lost if his books we re changed. That was his attitude. He expressed that attitude very clearly in 1974 in that conversation and in that letter you’ll see the statements Prabhupada made about how everything will be ruined if his books are changed.“

“With the BBT, the size of the books, the type of art in the books and so on, on principle Prabhupada would not allow changes even if the change was an improvement. Just to teach that principle of don’t change.”

“Prabhupada just explained how everyone’s a rascal for daring to touch anything in his books. The greatest anxiety he has is that after he’s gone we will add things to his books that are bogus, we will take things out that are bona fide, we will make changes in his books and the whole work for 10,000 years, his plan Prabhupada was working on, it will all be spoiled by us because of our tendency to change. And Prabhupada gave an example that the disease to do things differently is so inherent in the Americans that for the sake of doing things differently we would walk on our hands rather than our feet.”

“Don’t you dare change the picture on my book! I have deliberate ly chosen the picture of Visnu because I want this book to be attracting the Mayavadis and impersonalists. So that was the first direct instruction that I had received from Prabhupada which gave me an understanding o f how much he would meditate on every facet of his books. The art, the size, the pictures, who the market was. And I began to realize Prabhupada is very much on top of his book design and publishing.”

“If you put anything bogus in my book , this is my greatest fear that you will ruin my book and the whole book will be ruined because of you!“

“The first of many experiences I’ve had with Prabhupada literally drilling me , pounding it into my head that you’re never allowed to change anything in his books. He trained me so intensely on this point. Even when the changes make sense he wouldn’t let me change. Just to train me.”

One thought on ““They are ruining my books””