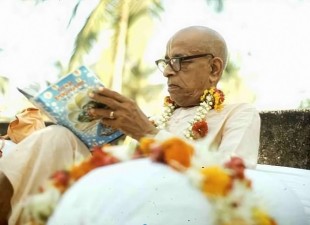 BY MADHUDVISA DASA ON MARCH 27, 2014 (Posted from www.bookchanges.com)

ISKCON are trying to force devotees to only purchase books that contain thousands and thousands of unauthorized changes to and they are practically banning the reading and distribution of Srila Prabhupada’s original books.

Srila Prabhupada’s mission was to write, publish and distribute his transcendental books. Prabhupada has taken the timeless knowledge of the Vedas and presented it completely without any compromise in a language and style so easy to understand. Anyone, no matter how fallen, can understand Vaisnava philosophy and become a fixed up devotee of Krishna by reading his books.

As confirmed many times by Ramesvara Prabhu [who was in charge of the BBT and the person ultimately responsible for publishing Srila Prabhupada’s books] Prabhupada’s greatest fear was that after his disappearance his disciples [who were infected with what he called “the American disease”, the tenancy to always change] would change his books and thus ruin everything.

“Prabhupada just explained how everyone’s a rascal for daring to touch anything in his books. The greatest anxiety he has is that after he’s gone we will add things to his books that are bogus, we will take things out that are bona fide, we will make changes in his books and the whole work for 10,000 years, his plan Prabhupada was working on, it will all be spoiled by us because of our tendency to change. And Prabhupada gave an example that the disease to do things differently is so inherent in the Americans that for the sake of doing things differently we would walk on our hands rather than our feet.” (Ramesvara interview 1981)

There are hundreds of direct orders by Srila Prabhupada forbidding changes in his books. Even if they changes were apparently an improvement on principle Prabhupada would not allow any changes to his books:

“I’ve had many experiences with Prabhupada literally drilling me, pounding it into my head thatyou’re never allowed to change anything in his books. He trained me so intensely on this point. Even when the changes make sense he wouldn’t let me change. Just to train me.” (Ramesvara interview 1981)

This order from Srila Prabhupada forbidding changes to his books is no secret. If you read Prabhupada’s letters you can not miss it. It is everywhere. Prabhupada is often complaining about the “American disease” of always changing and he orders his disciples not to change anything.

Hayagriva Prabhu was a University professor in English. Eminently qualified to present Srila Prabhupada’s books in a language and style that was perfect for the Western audience. The combination of Srila Prabhupada’s writing and Hayagriva’s editing was certainly a grand success. On the other hand Jayadviata was a high-school drop-out with no qualifications in regard to the English language, however he was a very good typist. Prabhupada has said in one place that Hayagriva is the best editor and in another place that Jayadviata is the best typist. So it was like that. They were both experts in their respective fields.

Jayadviata got a copy of Prabhupada’s authorized 1972 Macmillan Gita and scribbled his changes on the book.  He claims his changes are based on early drafts and transcriptions of dictation tapes, before Prabhupada and Hayagriva had worked on it together extensively. But on close examination this claim turns out to be false. There is very little correlation between the so-called original manuscript and Jayadviata’s changes to Prabhupada’s Gita. Even if it was true he was trying to ‘correct’ Srila Prabhupada’s final, authorized, approved Bhagavad-gita As It Is based on first drafts that had later been corrected and edited by Srila Prabhupada himself and his chosen editor Hayagriva. It is outrageous. It is insane. No author wants his final, edited, approved and published book changed back to some early draft or dictation tape.

Anyhow the result was a “Revised and Enlarged” edition of Bhagavad-gita As It Is containing more than one thousand significant changes. The style and feel of the book has completely changed. Hayagriva’s English is beautiful and poetic and Jayadviata’s Engilsh is as you would expect from a high-school dropout.  As well as completely destroying the style and feel of the book he made many philosophical changes, some very subtle and others so outrageous that his “Revised and Enlarged” edition, in places, says the exact opposite to what is said by Srila Prabhupada in his original “Complete Edition.” For example Prabhupada’s original Gita (10.34 purport) says:

“One need not read many books on different subject matters; the ability to remember a few and quote them when necessary is another opulence.”

And Jayadvaita obviously does not like this so he changes it to:

“And the ability not only to read many books on different subject matters but to understand them and apply them when necessary is intelligence (medha), another opulence.”

So the “Revised and Enlarged” Gita encourages reading many books on different subject matters and applying them when necessary while Prabhupada’s Gita discourages this. And we can not find this instruction to read many book on different subject matters anywhere else in Prabhupada’s teachings. This is a new teaching, Jayadviata’s teaching, that has appeared for the first time in his “Revised and Enlarged” Bhagavad-gita. He just inserts his teachings, realizations and interpretations into Prabhupada’s books like this whenever he thinks it is appropriate to do so.

I can not very extensively discuss the changes here because there are so many, unlimited, endless changes, not just in Bhagavad-gita, but in many other books. I would ask you to please go towww.BookChanges.com and make a through study of the articles there.

It is amazing. BBTI gives complete freedom to their editors to change anything they want to in Prabhupada’s books. And there are no checks and balances. The editors don’t even have to keep any records of what they change. They don’t have to tell anyone what they change.  BBTI put complete and absolute faith in their editors and allow them to change anything and everything in Prabhupada’s books and then they print the changed books without having the slightest idea what has been changed!

This could never happen anywhere except in ISKCON. Can you imagine any organization, spiritual or otherwise, that would let one unsupervised person with no checks and balances whatsoever change whatever he wanted to change in the vital foundational documentation that forms the basis of the organization? It is insane, completely and absolutely and totally insane. This completely and totally destroys the authority of the books currently being printed by BBTI.

After Dravida (another BBTI editor) reedited Srila Prabhupada’s Caitanya-caritamrta by himself  with no checks and balances I asked Jayadviata if he was aware of what changes Dravida had made, his reply was “No. I do not know the specific changes, but I know the categories of the changes he made.” So BBTI printed a significantly changed edition of Sri Caitanya-caritamrta without knowing what had been changed!

When questioned about one very radical unauthorized change on the guru issue on page 1 of Sri Caitanya-caritamrta Dravida’s reply was: “What Prabhupada says does not tally with the understanding of guru we currently have in ISKCON… I agonized over this for days… and then decided to change it.”

So “Only BBT” is absolutely out of the question. The unauthorized changed books BBTI are printing carry no authority whatsoever. Even BBTI themselves are unaware of the changes their editors are constantly making to Prabhupada’s books. So no one can know when they are reading a BBTI book if what they are reading is from Prabhupada’s original book or not. No thoughtful person will ever be interested in these unauthorized books. They have purposely implemented a revisionist mentality knowingly in defiance of Srila Prabhupada’s very clear and direct orders not to change his books.

Also please read the articles at www.BookChanges.com and educate yourself on this issue which is the most vital issue for the future of Srila Prabhupada’s movement and Krishna consciousness.

Chant Hare Krishna and be happy!

2 thoughts on “Why “Only BBT” is Out of the Question”