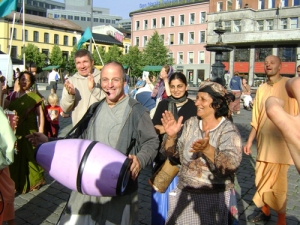 BY: PARASURAM DAS (From Sampradaya Sun)

Aug 05, 2014 — UK (SUN) — We arrived in Scandanavia for the Rathayatra tour (7 Rathayatra festivals). The first words I heard from a local devotee were “thank you for defending Srila Prabhupada’s original books”. Then I noticed devotees wearing T-shirts promoting BBT printing. Yep, we have a conflict.

In this age of Kali there are few things we can agree on. At least we all agree on the Mahamantra being chanted, and we used to be able to agree on the purity of the books. It was an argument that set us above other “religions” who had watered down their books. But now we are in danger of disunity again over something that could have been avoided. Even the famous barking dog video revolved around the book changes.

All the deviations in our history had one thing in common: the concept that Srila Prabhupada was inaccessible or insufficient. Zonal Acharyas, Gopi Bhava Club, Narayana Maharaj, Hinduism, etc. Some groups still remaining within ISKCON still believe that Srila Prabhupada’s books are not Sabda Brahman. Not one word nor one full stop should be changed. Srila Prabhupada taught us this principle:

“So unless one is self-realized, there is practically no use writing about Krsna. This transcendental writing does not depend on material education. It depends on the spiritual realization. You’ll find, therefore, in the comments of Bhagavatam by different acaryas, even there are some discrepancies, they are accepted as asat-patha. It should remain as it is.” (Lecture, Vrindavana, March 31,1976)

It was Krishna’s arrangement that Jayadvaita Swami and Dravida prabhu made so many mistakes and unnecessary changes, as it has highlighted our offence of seeing Srila Prabhupada’s books in a relative way. Even though Srila Prabhupada said that discrepancies should remain unchanged the BBT ignore this, and even worse, make changes when there is no discrepancy. There are many cases where the manuscript and the original edition are in agreement, and with perfectly good grammar. One example is the many times that “owner of the body” has been changed to “knower of the body”. The BBT conveniently avoids talking about this.