The original, approved and authorized 1972 edition of Bhagavad-gita As It Is:

Then something strange happens in the BBT Internationals 1983 edition:

“The Yoga sutra also prescribes meditation on Visnu, and not meditation on the void. The so-called yogis who meditate on something which is not on the Visnu platform simply waste their time in a vain search after some phantasmagoria. We have to be Krsna conscious…” (Bg. 2.61 purport) 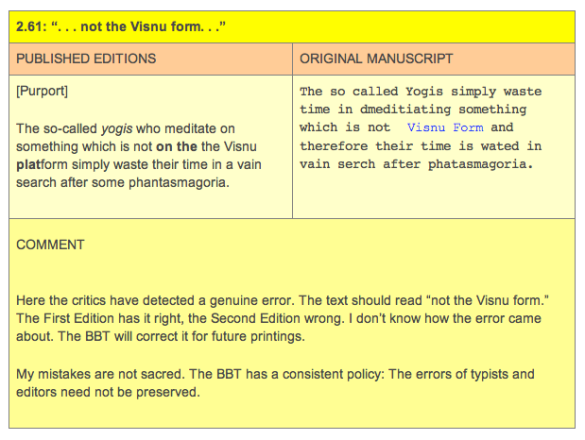 Jayadvaita Swami writes here that he doesn’t know how the error came about. But in a Youtube video from the same website he says something else:

So all of a sudden Jayadvaita Swami remembers what happened: a real good story of several “manuscripts”, and the real original manuscript missing.

So we have different manuscripts, and we have Jayadvaita Swami changing on the basis of his “impressions” (clearly not a recognized source of knowledge and clearly not the standard method used by editors). Jayadvaita Swami thinks that if we are missing what he has told the world is the “original manuscript”, then we just take one of the other available manuscripts, and if we happen to make a mistake, then we just reverse it next time. What is the problem?

Is this the way we to honor sacred books and help them stay authoritative in the eyes of the people of the world?

“If someone find mistakes in our work and the work done later – reverse it! It is not sacred. It is not that Hayagriva’s mistakes were sacred and mine, mine aren’t – or my mistakes, or his mistake weren’t sacred and mine are…”

So Jayadvaita Swami is fallible, and he is able to admit his mistake in regard to “Visnu platform”. But why, then, will he not admit all the other mistakes he has made? Devotees have been documenting his mistakes for years, but he will not admit them. Why?

In the last part of the video Jayadvaita Swami says that we should apply a principle of being “as close to Prabhupada as possible.” And this is true. But what is closest to Prabhupada – is it his many earlier drafts or the final book he himself completed together with his editors and which he approved, published, called the “Complete Edition” and “Definitive Edition” and read, lectured from and distributed for years without asking for more than 1-3 mistakes corrected?

Why will Jayadvaita Swami not admit that his biggest mistake is that he bases his editing on the mistaken idea that we can change the final, approved book back to its earlier drafts (of which there are many)?

And why will he not admit that it is logically impossible to correct ALL mistakes in Prabhupada’s books without violating the arsa-prayoga principle of not correcting the acarya? A principle Prabhupada demanded that we follow.

Being close to Prabhupada can be done by honoring the arsa-prayoga principle and accepting Prabhupada’s book as he accepted them himself.