The picture above contains some unserious propaganda material for the BBT International.

2) It is a fact that many devotees have been kicked out of temples because they preferred and advocated, even slightly, the original books.

3) What about all the other books? This is only the Gita. Will the original CC, SB, BBD, POY, PQPA, etc. also be sold on ISKCON property, and on their websites?

Due to intense pressure from tens of thousands of devotees worldwide the BBTI have been forced – against their will – to again print the original edition of Srila Prabhupada’s Bhagavad-gita As It Is. 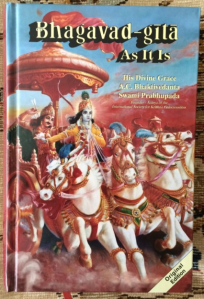 But why support the BBTI, when they use the money to destroy Srila Prabhupada’s books?

Also, the original edition from BBTI is not as good quality as the one sold from Krishna Books Inc.

My recommendation: Buy your original books from http://www.krishnastore.com or any other shop that sells the original books as printed by Krishna Books Inc. (KBI).

The controversy about the editing in Srila Prabhupada’s books are now to be found on Wikipedia. Did Jayadvaita Swami and the BBTI really think they could eternally hide the fact that they are editing the books?

People will now realize that they cannot trust the books they buy from the International Society from Krishna Consciousness.

They might buy one of the other 700 translations of the Gita.

How could this have been avoided?

Answer: By never changing the books in the first place!

Hopefully people will soon start to ask for the original edition.

As of now the only 100% original pre 1978 text versions of Srila Prabhupada’s books are the scans available on this website.

The digital text versions, such as what are found in the Vedabase, are not exactly perfect replicas of the books that were printed during Srila Prabhupada’s presence. There are no digitized versions of these books available anywhere as of now, except the original book SCANS available on this site krishnapath.org for free download.

We are working hard to preserve and distribute the original, authorized and blessed books of Srila Prabhupada and to eventually have digitized versions of all his original works. But as of now the volunteers have only completed the very first laborious task of manually scanning every page of all those texts and making them available on this site for you to download for free simply as raw book scans.

The “Original Book Vedabase” is the closest thing available in digital text format and is an early step of the preservation process although not identical to the actual books that were printed during Srila Prabhupada’s manifest presence. The next step that we are currently at is to manually go through all the Vedabase book files and word by word, comma by comma compare them to the scans and revert them back to the original way. As Srila Prabhupada has said “The next printing should be again to the original way.” We currently have the original book scans available for free download on this page.

For many years the Krishna Path team has been looking for someone able to do this work. By the mercy of Krishna and Srila Prabhupada we have recently found someone to do this huge task. He can produce about one 500 page book’s text exactly how it was in the pre-1978 original edition (including all original art, text, chapter links etc) 100% completed and available to the world in only one or two months! Upon completion those texts will be immediately available for free download to the world on the KrishnaPath.org website. We will offer them in all digital formats such as PDF, ePub, Kindle etc!

The devotee doing this huge laborious task of producing/digitizing 500 pages of 100% original books is simply asking $200 per 500 pages. As mentioned, upon completion, the files will be available on this website for free download to the world in all major formats!

To sponsor one month or more of seva click on the donate button which you will find here.

Here is a current list of books that have been completed up to date:

The Nectar of Instruction (1976 edition)

If you would like to sponsor one or more books please donate. For any questions please email info@krishnapath.organd we will be happy to work with you to make more original books available for free download to the world!

Everyone please give your blessings and thanks to the sponsors!

Please copy and paste the following direct link and share it on your favorite social media sites to help spread the good news about this most important project!

It seems that finally the BBT International has been listening to the arguments presented by many concerned devotees and is now taking a step in the right direction by putting Jayadvaita Swami’s name in the edited edition:

Andrew Whitlock wrote in a mail to Jayadvaita Swami:

“Firstly I noticed that Your name does not appear on the re edited version.”

“It will appear in the “Note about the Second Edition” in upcoming printings.”

To be completely honest, transparent and follow academic rules Jayadvaita Swami’s name ought to appear on the front cover of the book, so everyone – in advance – will know that this is a posthumously edited book.

An example of how it is supposed to be done is here:

Of course, eventually we need to have Jayadvaita Swami’s edited version of Bhagavad-gita As It Is (and all other posthumously edited versions of Srila Prabhupada’s books) completely eliminated. But as long as the BBTI insist on violating the sastric rule of arsa-prayoga, they at least should mention it on the books. 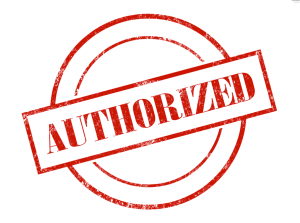 Recently BBT International (BBTI) and Jayadvaita Swami have been making public announcements about the importance of devotees buying books from the BBT exclusively. In this way they are indirectly saying that devotees should not buy books from Krishna Books Inc. (KBI) who distributes Srila Prabhupada’s original, pre-1978, books. To substantiate their claim they refer to a letter from Srila Prabhupada saying that all centers should buy from the BBT.

There are several problems with the statements of BBTI and Jayadvaita Swami.

First of all BBT and BBT International (BBTI) are not identical. To make such a claim, or to try to give that impression, is to deceive the devotees. BBT International and Jayadvaita Swami have been actively engaging in this act of deception from the inception of BBTI, and most devotees in ISKCON have accepted their claims blindly. But there is a difference between BBT and BBTI.

END_OF_DOCUMENT_TOKEN_TO_BE_REPLACED

“Regarding the controversy about book distribution techniques, you are right. Our occupation must be honest. Everyone should adore our members as honest. . . These dishonest methods must be stopped. It is hampering our reputation all over the world.” (Letter to Rupanuga, 1-9-75)

The way in which Prabhupada’s books are presented to the public is also part of the book distribution process. To hide the fact that the 1983 edition has hidden co-authors that have made extensive additions, subtractions and changes to the book is not honesty. It will hamper ISKCON’s reputation.

In fact, this has already hampered ISKCON BBT International’s reputation as a trustworthy publishing company, as the scholarly community has begun to voice their opinions on the deceptive practices used in the post-humous publications. Factors such as using scholarly reviews from the original 1972 edition (when those scholars never saw, nor reviewed, the vastly edited later edition) have clouded the authenticity of Srila Prabhupada’s sacred books. Respectable scholars would never do such a thing.

Not clearly disclosing the fact that the 1983 edition has hidden co-authors has greatly damaged the reputation of ISKCON BBT International, and will continue to do so unless responsible remedial action is taken by those entrusted with this important work.

The fact that there is no dating of the posthumous editions also calls to question the integrity of the BBT International. It has been noted that the posthumous editions began to appear perhaps six years after Srila Prabhupada’s demise. This tends to indicate, according to some, that the author had no interest or inclination towards a re-editing of his Bhagavad Gita.

And since there is no record of the author ordering or approving such edited work, it leaves the posthumous edition hanging in mid-air, with no reliable data to show who did it, when they did it, and where it came from. This is a grand deception.

Below is an example of a revised book where honest means have been used. As long as the BBT International insists on publishing their edited 1983 Bhagavad-gita As It Is it must meet the same criteria of honesty to the be accepted in scholarly circles.