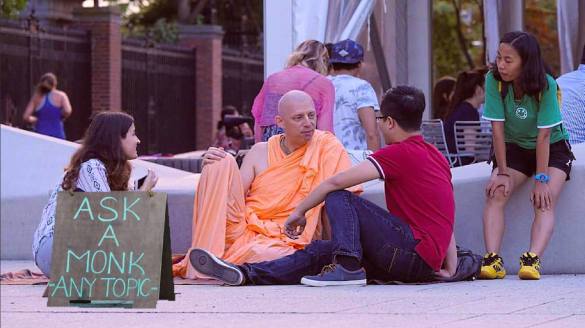 Ter Kadamba Das preaching: “Ask a Monk – Any Topic”. Well, when  asked about the book changes he deleted my questions and blocked me on facebook!

Ter Kadamba Das: For some odd reason there is still some confusion in ISKCON about book editing. I think this article should clear everything up: http://www.sivaramaswami.com/en/2010/01/02/“the-mystery-of-the-edited-books”/

Ter Kadamba Das: “Prabhupada has on some occasions found errors in text he personally wrote, and complained about the lack of editing.”

“Prabhupada has on some occasions found errors in text he personally wrote, and complained about the lack of editing.”

Prabhupada: The nonsense, they are… They are correcting my trans… Rascal.

In 1977 Srila Prabhupada also said they could only divide the synonyms – not change them:

In chapter one of the 1983 edition of Bhagavad-gita there are around 130 changes to Srila Prabhupada’s own personally typewritten sanskrit translations. You can see the change here:

If any links are broken I shall gladly provide them.

In light of the above statements from Srila Prabhupada, how is this justified?

Jayadvaita Swami has not only corrected mistakes. I have documented this in an e-book. Here in something from the introduction:

Many changes have been made to Srila Prabhupada’s books since his departure in 1977. As we all know this has caused a lot of controversy.

This e-book presents new evidence to the effect that the BBT International, and Jayadvaita Swami in particular, have overstepped their authority by making changes that Srila Prabhupada did not want.

On the contrary, these articles will document that the BBT International have

We humbly ask that you read this e‐book, and also visit the website http://www.arsaprayoga.com for much more information and many more examples of changes to Srila Prabhupada’s books.

The e-book can be found here:

Ter Kadamba Das: Ajit krishna Prabhu. I deleted your comment because I find it offensive to the Vaisnavas. Jayadvaita Swami is my param guru, and I cannot allow you to use my timeline to blaspheme him. The gaudia vaisnava parampara is a siksa line, and that means we don’t just read Prabhupada’s books and then speculate on the meaning – we check with the senior devotees, the self realized souls, if we have understood correctly. You do not do that, and that makes your arguments invalid. Even worse is to take segments of letters or conversations (rather than the books themselves) in order to push our own issues. I posted an article by HH Sivarama Swami because that makes it authorized. Whatever I may come up with in my tiny brain is superfluous if I don’t check it with the self realized souls. The same goes for you. You have effectively sacrificed the association of the devotees in order to push your issue about the book editing, and I find that sad. I don’t mean to attack you, I am truly writing this in an attempt to help you, even though it may not seem so. For what it is worth, I consider you a devotee of the Lord, and I believe you are honestly trying to serve Prabhupada to the best of your ability. Hare Krishna my friend!

You say you find my comment offensive. If you hear blasphemy of devotees there are three things you can do. In the Nectar of Devotion it is stated:

“If someone is heard blaspheming by words, one should be so expert that he can defeat the opposing party by argument. If he is unable to defeat the opposing party, then the next step is that he should not just stand there meekly, but should give up his life. The third process is followed if he is unable to execute the above-mentioned two processes, and this is that one must leave the place and go away.” (NOD, Ch. 9, Blasphemy)

Instead of deleting my comment it would have been better service to your param guru if you had defeated my arguments.

You say I do not consult senior devotees to check my understanding. In fact I do. I have quite a network of senior devotees and friends whom I consult often, and who encourage me in my opposition against the changes to Srila Prabhupada books. I have simply chosen to listen to OTHER senior devotees than you listen to. You have used your discriminative powers and chosen your authorities, and I have used my discriminative powers and chosen mine (including my own Guru Maharaja who was against the changes to Srila Prabhupada’s books).

Our respective authorities simply contradict each other on certain points. If we want to find out who is correct regarding the book changes, and who is actually blaspheming who (am I blaspheming your param guru, or is your param guru blaspheming Srila Prabhupada?), then we have to see who’s points are backed by guru, sadhu and sastra, logic and observation.

If you had answered the points I raised in my comments, then we actually would have had a chance to settle the matter and see who of us is actually following bona fide authorities.

You claim I “take segments of letters or conversations (rather than the books themselves) in order to push our own issues.” But as I mentioned before, instead of simply deleting my comment and throwing unsubstantiated accusations it would be a better service to your param guru if you actually defended your own case with the help of guru, sadhu and satra, logic and observation.

In order to defend your case, and thus bring this exchange to a befitting level of intelligence, you need to show specifically what is wrong with the points I presented, including whatever quotes from Prabhupada I posted.

I hope you will do that, and I hope to hear from you soon.

Ter Kadamba Das deleted both my above comments shortly after they were posted. Later he deleted the whole thread, including his own opening statement.