The 1993 version changes all of this. The book is slashed from 99 pages to 77 pages! And the type is not even smaller! So much has been cut out. In one place four complete pages have been deleted!

All the text has been heavily edited and the whole mood of the book has been completely changed. We have not done anything below about the editing, we have just pointed out a few pieces of text (shown in bold) that have been completely deleted from the new edition.” (http://bookchanges.com/iskcon-perfect-questions-perfect-answers-book-changes/)

The BBT International has tried to justify the changes to Perfect Questions, Perfect Answers. But their attempted justifications are mutually exclusive.

“In the mid-1990s the BBT published a second edition of Perfect Questions, Perfect Answers, edited by a less experienced BBT editor. Because readers of this edition pointed out numerous editorial discrepancies, the BBT directors resolved in 2002 that Dravida Dasa will review the book before its next printing. Either he will correct the discrepancies, or the BBT will revert to the first edition.” (ISKCON Communications Journal Vol. 11, Editing the Unchangeable Truth: An Overview of the Editorial History of the Books of His Divine Grace A. C. Bhaktivedanta Swami Prabhupada, 2005)

In 1996 the editing is of Perfect Questions, Perfect Answers was described by Jayadvaita Swami as follows: 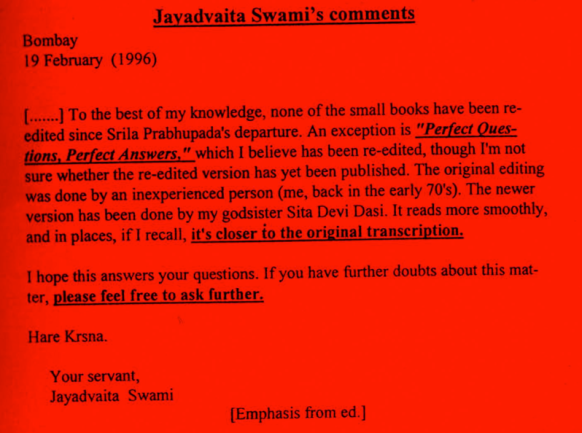 (From Madhudvisa Dasa’s ISKCON’s Changes to Srila Prabhupada’s Bhagavad-gita As It Is and Perfect Questions, Perfect Answers)

In this letter Jayadvaita Swami mentions the name of the “less experienced editor” (Sita Devi Dasi), and he claims that her editing made the new version read “more smoothly” and made it “closer to the original transcription”. But he later had to admit that this new and less experienced editor was allowed to change the books of Srila Prabhupada without proper supervision, and that her editing was not good enough.

So this is how Jayadvaita Swami’s explanations sounded in 1996 and 2005 respectively. But a few years ago one of his colleagues posted the following on the internet:

“A report from Ranjit das, BBTI:

Recently someone has tried to stir up a new criticism of the BBT by pointing to the re-print (in the 1990’s) of the book Perfect Questions Perfect Answers. Some 20 pages were taken out of the book. Why?

At that time PQPA had been out of print for a long time. The devotee in charge of operations really wanted to re-print the book because he liked it so much. However there was a problem. The book was around 120 pages long. The small books that the BBT were printing at the time had been formatted into 96-page books so that the printers would give a really good price. If PQPA were printed at the 120 plus pages then most of the distributors would not buy them and distribute them because such books as Perfection of Yoga, Beyond Birth and Death, etc were cheaper.

Our devotee in charge of operations read the book and a good section consisted of a conversation between Srila Prabhupada and an Indian gentleman who was also present at the time. So our devotee figured that this part could go because it was not really part of the conversation between Bob Cohen (now Brahmatirtha Das) and Srila Prabhupada. But this was just not enough to bring it down to the 96-page format so a few more pages were cut.

Srila Prabhupada himself authorized the same thing with the abridged Gita. This devotee simply followed the precedent. But Srila Prabhupada wanted the word to go out and so did our intrepid BBT manager. And now this is being pointed to as some kind of conspiracy. So our BBT manager, instead of being lauded for the 96 pages that were printed and distributed is criticized for the 20 pages that he did not.” (https://www.facebook.com/bbtedit/posts/10152724990094126)

Like I said, these stories are mutually exclusive. Take a look:

In addition to this, Madhudvisa Prabhu has documented that in fact the second edition has not just had sections and pages cut out. Quite a few individual words and sentences have been randomly removed. Here is a link to Madhudvisa Prabhu’s comparisons. Please check it out yourself.

The controversy about the editing in Srila Prabhupada’s books are now to be found on Wikipedia. Did Jayadvaita Swami and the BBTI really think they could eternally hide the fact that they are editing the books?

People will now realize that they cannot trust the books they buy from the International Society from Krishna Consciousness.

They might buy one of the other 700 translations of the Gita.

How could this have been avoided?

Answer: By never changing the books in the first place!

Hopefully people will soon start to ask for the original edition.

“Regarding the controversy about book distribution techniques, you are right. Our occupation must be honest. Everyone should adore our members as honest. . . These dishonest methods must be stopped. It is hampering our reputation all over the world.” (Letter to Rupanuga, 1-9-75)

The way in which Prabhupada’s books are presented to the public is also part of the book distribution process. To hide the fact that the 1983 edition has hidden co-authors that have made extensive additions, subtractions and changes to the book is not honesty. It will hamper ISKCON’s reputation.

In fact, this has already hampered ISKCON BBT International’s reputation as a trustworthy publishing company, as the scholarly community has begun to voice their opinions on the deceptive practices used in the post-humous publications. Factors such as using scholarly reviews from the original 1972 edition (when those scholars never saw, nor reviewed, the vastly edited later edition) have clouded the authenticity of Srila Prabhupada’s sacred books. Respectable scholars would never do such a thing.

Not clearly disclosing the fact that the 1983 edition has hidden co-authors has greatly damaged the reputation of ISKCON BBT International, and will continue to do so unless responsible remedial action is taken by those entrusted with this important work.

The fact that there is no dating of the posthumous editions also calls to question the integrity of the BBT International. It has been noted that the posthumous editions began to appear perhaps six years after Srila Prabhupada’s demise. This tends to indicate, according to some, that the author had no interest or inclination towards a re-editing of his Bhagavad Gita.

And since there is no record of the author ordering or approving such edited work, it leaves the posthumous edition hanging in mid-air, with no reliable data to show who did it, when they did it, and where it came from. This is a grand deception.

Below is an example of a revised book where honest means have been used. As long as the BBT International insists on publishing their edited 1983 Bhagavad-gita As It Is it must meet the same criteria of honesty to the be accepted in scholarly circles.