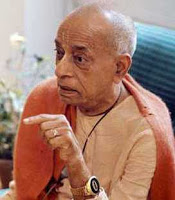 According to Satsvarupa Goswami in his Prabhupada Lilamrita Srila Prabhupada said arsha-prayoga establishing a no change policy:

But one day while sitting in the garden with Tamala Krsna, Svarupa Damodara, and others, Srila Prabhupada became very disturbed when he detected a mistake in one of his already printed books. Tamala Krsna was reading aloud a verse from the First Canto which began, “Munayah sadhu prsto ‘ham.” Srila Prabhupada had him read the synonyms.

“Sadhu?” asked Srila Prabhupada. Thus he uncovered a thoughtless mistake made by the Sanskrit editors. Sadhu means “devotee,” not “this is relevant.” Srila Prabhupada became very angry and denounced the “rascal Sanskrit scholars.” “A little learning,” he said “is dangerous. Immediately they think they have become big scholar, thinking, “I shall arrange!’ And then they write all nonsense.” He continued speaking about the mistake for half an hour. He was disturbed. He ordered Tamala Krsna to write at once to the BBT and stop these speculations by his disciples-changing his books in the name of editing The devotees were startled to see Prabhupada so angry; he was supposed to be peacefully relishing a Srimad-Bhagavatam reading here in his garden. Such a change was very serious, he said, because it changed the meaning. “Even if the authorized acaryas would make a mistake,” he said, “it would not be changed. This is arsa-prayoga. In this way the acaryas are honored.” (Srila Prabhupada Lilamrita, chapter 52 “I Have Done My Part”)

“Macmillan Company was publishing Bhagavad-gita, and Prabhupada himself was publishing Teachings of Lord Caitanya through Dai Nippon in Japan. Because Brahmananda had contacted the editors at Macmillan Company, Prabhupada credited him with the success of the Gita’s being published by such a famous company. Brahmananda was also Prabhupada’s man for dealing with Dai Nippon. Both books were on tight printing schedules, and Brahmananda had to return quickly to New York with the corrected proofs.

Brahmananda: “I came up to show Prabhupada the galley proofs for both Teachings of Lord Caitanya and Bhagavad-gita, As It Is. I just happened to have both galley proofs that had arrived. So it was a wonderful thing to bring these galley proofs to Prabhupada for checking. I was there only for a few days, maybe a weekend or so. Prabhupada personally read through the entire galleys and made notations in his own hand. He did the proofreading of the galleys. Everything was done by Srila Prabhupada. It was a very personal kind of thing. Of course, that gave Prabhupada great pleasure because he wanted his books published, and we had started to do it. So Prabhupada took great pleasure in proofreading those galleys. And he handed them to me, and it was very wonderful.” (SPL 7-4: A Summer in Montreal, 1968 / http://vedabase.com/en/spl/7/4)

For those who are not familiar with the term “galley proofs” here is a definition from wikipedia:

“In printing and publishing, proofs are the preliminary versions of publications meant for review by authors, editors, and proofreaders, often with extra wide margins. Galley proofs may be uncut and unbound, or in some cases electronic. They are created for proofreading and copyediting purposes, but may be used for promotional and review purposes also.”

An interesting point in this regard – which serves as an example of unauthorized editing – is that the word ”coward” was in verse 2.35, and that the word ”brimming” was in verse 2.1 both in the 1968-edition and the 1972-edition. But still the BBT International took the liberty to remove and change these words on their own initiative in their 1983-edition. Prabhupada saw and approved these two words. He did not change them to ”insignificant” og ”full of tears” respectively, even though he had from 1968-1972 to do so if that was what he wanted. Even after 1972 he could have ordered them changed. But just like with all others words and sentences in his Bhagavad-gita, As It Is (except 2-3 instances) he did not give any order to change them. And therefore we also do not have the right to do it.