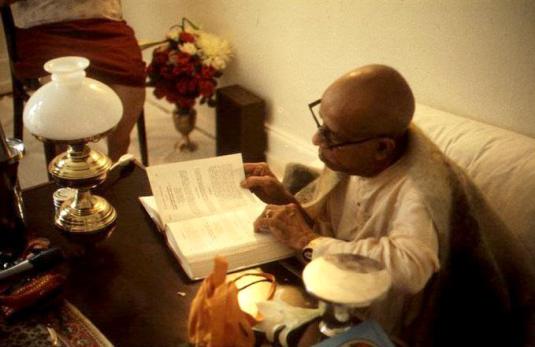 By Locanananda Dasa (originally posted on his blog)

Srila Prabhupada’s desire was to see his books translated into all of the major languages of the world. By 1970, numerous centers had opened in countries outside of the United States and translation work had begun in Germany, France, Canada, South America and Japan. When the German devotees undertook the translation of the Srimad Bhagavatam, they discovered what they thought were grammatical discrepancies in the original English. The translators reasoned that if their spiritual master could publish his books with flaws included, then their own translation work could also contain mistakes and no harm would be done. In a very strongly-worded letter, Srila Prabhupada chastised his disciples for thinking they could imitate their spiritual master and explained that to avoid this offense, they must follow the principle of arsha prayoga.

One should not see mistakes in the books written by his spiritual master, nor should one think he is able take the same liberties taken by him. His Divine Grace warned his disciples that only if they were able to spread Krishna consciousness all over the world as he had done could discrepancies in their translation work be overlooked, otherwise not.

“So far your telling me that some devotees consider that because there may be some grammatical discrepancies in my Srimad Bhagavatam, First Canto, then they may also be allowed to translate with errors accepted, that is just like imitating Raslila. When you do all other things like Krishna, then you can do Raslila. So if these other writers can do like me and spread Krishna consciousness all over the world by becoming big Vedic scholars, then they can do.

“If one is too big, there is no mistake. Arsha prayoga means there may be discrepancies but it is all right. Just like Shakespeare, sometimes there are odd usages of language, but he is accepted as authority. I have explained all these things in my preface to First Canto.” (Letter to Mandali Bhadra dated 1-20-72 )

Sometimes, the editors try to justify their actions by claiming that scholars would have found fault in our books had they not been revised. The many, many letters Srila Prabhupada received from world-renowned scholars that glorified his phenomenal literary output contradict this false propaganda. The academic community was astounded by the magnitude of his undertaking and showed its appreciation for the exactness with which he translated and the profound devotion he expressed in his Bhaktivedanta purports. We have chosen one such letter which exemplifies to what extent Srila Prabhupada’s extraordinary efforts were acknowledged by the educated class of men. We advise the reader to keep in mind that these comments refer to the original BBT printing of his books.

Excerpted from a letter written by Sri R. Subrahmanyam, M.A., Deputy Research Director of the National Parliament of the Central Government of India:

“To teach this science of God to people everywhere and to aid them in their progress and development towards the real goal of life, Srimad Bhagavatam is most eminently fitted. In fact, this great ancient work of Vyasa will fill this need of the modern times, for it is a cultural presentation for the re-spiritualization of the entire human society. His Divine Grace, Srila A.C. Bhaktivedanta Swami Prabhupada, the founder-acarya of the ISKCON movement, has taken upon himself, in addition to his ceaseless travels and other multifarious activities in the service of the Lord, the stupendous task of translating this Sanskrit work into English in about sixty volumes for the welfare and happiness of mankind.

“So far, eighteen volumes of this most beautiful literature on God have been brought out by ISKCON, and the rest are under preparation. Needless to say that in keeping with the excellence of their other publications, the publishers have seen to it that the printing, get-up, and pictures in these volumes are also of the highest quality, as though to serve as an ornament to the divine contents of the books.

“This is a rare opportunity for people and leaders of every country, race and community in the world to know and understand the glorious science of God and work for their perfection.”

We challenge the BBT managers and their editors to produce a single letter from any recognized scholar agreeing with them that Srila Prabhupada’s original books were full of mistakes and had to be revised for his message to be properly understood. Since their purpose in making these revisions was to impress scholars, we hereby challenge them to come forward and produce evidence that there are indeed scholars who approve of the thousands of changes they made to Srila Prabhupada’s books.

Another argument presented to support the BBT’s questionable editorial policy was that their editors, by dint of their many additional years of experience, had become more qualified than Srila Prabhupada’s earlier staff of editors, and this had supposedly earned them the right to review all of the books after Srila Prabhupada’s disappearance and make whatever changes they thought were necessary. In the late 1960′s, Hayagriva had similarly offered to redo some of Rayarama’s editorial work, thinking himself more academically qualified than his godbrother, but Srila Prabhupada did not approve of his proposal. Although Hayagriva was an accomplished professor of English at Ohio State University, contrary to his opinion (and that of today’s BBT managers), Srila Prabhupada affirmed that academic credentials are not the primary qualification to edit transcendental literature. In his reply to Hayagriva, he wrote:

“Rayarama may not be as qualified as you are, but his one qualification that he is fully surrendered to Krishna and his spiritual master is the first class recommendation for his editing any one of our literatures, because editing of Vedic literatures not depend on academic education.” (Letter to Hayagriva dated 1-15-68 )

It is evident from his letter that Srila Prabhupada considered his early editors to be fully competent because they were depending upon Krishna and the spiritual master to give them the ability to perform their service. His Divine Grace was very satisfied with the quality of their work and, to show his appreciation, he later wrote to Hayagriva, “I want your company always for editing my writings very nicely.” As far as we have been able to ascertain, he never contemplated having anyone redo the work of his editors.

It is also a fact that Srila Prabhupada’s involvement in the preparation of his books went far beyond his original dictation, although the BBT’s propaganda would lead one to believe that his participation ended there. The truth is that in order to guarantee a very high standard of presentation, Srila Prabhupada personally supervised all proofreading and editorial work and did not allow any significant changes to be made in the text of his books without his approval. It is customary that once a writer accepts an edited draft of his book, it immediately supersedes an unedited draft. When the BBT editors decided to work again from Srila Prabhupada’s original manuscripts, they were, in effect, rejecting the proofreading and editorial work that Srila Prabhupada himself had overseen. This is not how one shows appreciation for the spiritual master’s endeavor to publish his books, or for the service offered to him by others.