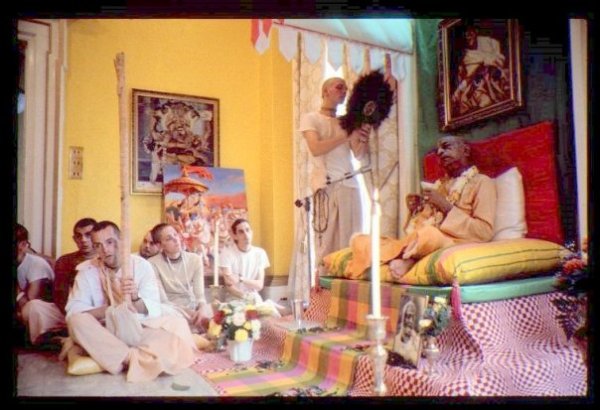 The text below was sent to the BBT International through their website (http://www.bbtedit.com/contact) and to Jayadvaita Swami and Dravida Prabhu’s personal e-mails (jswami@pamho.net, jayadvaita.swami@pamho.net, dravida108@gmail.com) the 7th Feb. 2014. We asked them to comment on the points raised.

So far we have not received any reply.

Here we see, in the background, the painting Prabhupada chose for the front cover of his Bhagavad-gita As It Is (standing yet unframed on the floor).

He was very happy about that painting, and he wished that Deities precisely resembling Krishna and Arjuna on the painting be made for the alter on the Gita-Nagari farm.

“Srila Prabhupada began to sow the seeds of inspiration in directing the future development of Gita-nagari farming community.  Prabhupada confirmed today that the presiding Deity should be Krsna and Arjuna, exactly as on the cover of the Bhagavad-gita.” (Tamal Krishna Goswami’s Diary, Prabhupada’s Final Days, August 30)

He also desired that the pictures on he covers on his books should remain the same on all their respective translations into other languages. This wish has, unfortunately, never been honored.

“And the covers, if possible, should always be the same for each respective book regardless of what language it may be printed in.” (Letter to Jadurani, Bombay, January 3, 1975)

An unfortunate local example of an unauthorized cover can be read in the links below:

DANISH BHAGAVAD-GITA AS IT IS COVER AGAINST PRABHUPADA’S INSTRUCTIONS

3 thoughts on “Prabhupada’s instructions on front covers not honored”